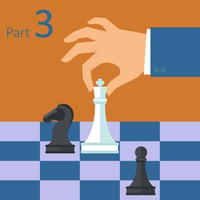 While my two previous blog posts focused on the similarities between playing chess and managing a project, it’s also important to note a big difference. Those pieces on the chess board aren’t human, but your team members are….

In chess, the knight moves in an “L-type manner, e.g., ‘up one square and over two’. When you choose to move it, it doesn’t ask why, it doesn’t suggest alternatives, nor does it provide reasons as to why it can’t or shouldn’t (even though I’m sure a talking knight would have saved my skin in one of my most recent games).

Sometimes, there is a tendency to discount human interaction as a cluttering factor, rather than an asset. There are indeed similarities between writing code and moving a chess piece. You tell it what to do (correctly), and it does it; there aren’t any conversations about last night’s Chicago Blackhawks game. If we’re not careful we can assume the same goes for managing the team. Years ago in the middle of a large BPM software implementation, our project manager jumped ship. Their replacement sipped some of the “treat the team like chess pieces Kool-Aid” and the behavior of the team began to change for the worse. People began to do exactly what was expected of them and nothing more. Things like raising potential problems, or spotting a gap and addressing it because “it’s not my job” hampered progress and quality. Team interaction faded since all direction was routed through the PM. Morale and productivity suffered and then people started to leave for greener pastures. After some honest heart-to-heart conversations with the PM about these issues, they recognized a change in mindset was in order and we were able to turn things around, but the lessons learned have stuck with me.

In particularly task-heavy situations like project management, we tend to focus on the tasks (the chess moves). After all, we’re measured on things such as milestones met, and sometimes the “social interaction” in meetings is dismissed as “wasting time”. I’ve been on teams earlier in my career where extreme focus on the work task was regarded as the ideal approach and friendly chat was interpreted with suspicion that person isn’t working as hard as the others. I learned however that adopting this mindset created a sterile environment which contributed to staff burn-out and less than optimal project results.

As a manager, you must be the catalyst for integrating behaviors across your team. The people you lead look to you to set an example and expect you to:

People are not chess pieces—we are not fungible. Everyone brings different strengths, capabilities, and perspectives to a project team. Instead of treating people as if they are chess pieces, treat them as the unique individuals they are.

Ken is a Principal at NVISIA. He has over twenty years of consulting experience covering business strategy, process optimization, requirements and rules management, customer experience, and relationship management associated with full life-cycle implementations of medium to large-scale projects.